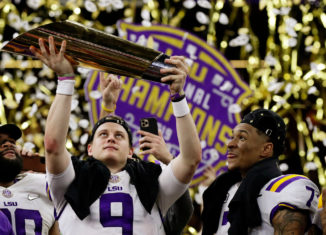 Before the excitement of the Super Bowl, there were college football playoffs which started on December 28 as LSU defeated the Oklahoma Sooners, and Clemson defeated Ohio State. In the first game, it was Joe Burrow dominating for LSU, throwing for seven touchdown passes. With that, Jalen Hurts’ historic college career finally has come to an end. From star Alabama quarterback to backup in the National Championship to Heisman contender, Hurts has truly been through it all. Ceedee Lamb was a star for the Sooners and is one of the top receivers in this year’s upcoming NFL draft. In the second game, Clemson narrowly defeated the Buckeyes by a score of 29-23. Sophomore stud Trevor Lawrence is still undefeated as Clemson’s quarterback. Justin Fields threw a crucial interception for Ohio State which led to the Tigers moving on. LSU and Clemson went on to square off in the National Championship game. As predicted, LSU dominated and brought home the national title. There was no question that this would be the outcome as LSU has one of the hottest college quarterbacks in recent memory in Joe Burrow. Already a college superstar, Burrow is certain to be the top pick in this upcoming NFL draft.