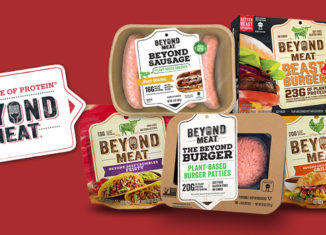 Beyond Meat has experienced a spectacular breakthrough in the notorious food industry with plant based meat. The company aspires to replace traditional meat entirely, separating animals from meat. Factors driving the population to the company include environmental benefits, health implications for elders, and trending vegetarianism and veganism for millenials.

The company started publicly trading about a month ago, and its success makes it clear that plant-based meat really is the future of protein. Beyond Meat’s stock skyrocketed, more than doubling its amount right off the bat. The company initially priced its IPO at $25 the night before trading boomed. The share price rose $46 the next day, and eventually surged to $65.75 by the end of the session. This gain of 163% is the best performing public offering seen in the U.S. since 2000. Beyond Meat’s market cap rose to about $3.8 billion, about $2.3 billion more than had been predicted. The business raised at least $240 million in the IPO, which will be put towards expanding manufacturing facilities and financing corporate based research.

The company Beyond Meat has a very specific goal that is rampantly spreading among other companies. On their website, they list their mission as such: “At Beyond Meat, we believe there is a better way to feed the planet. Our mission is to create The Future of Protein® – delicious plant-based burgers, sausage, crumbles, and more– made directly from simple plant-based ingredients. By shifting from animal, to plant-based meat, we are creating one savory solution that solves four growing issues attributed to livestock production: human health, climate change, constraints on natural resources and animal welfare.”

Meat alternatives are becoming extremely prevalent in the food industry. Ikea announced that there will now be a meatless version of their famous Swedish meatballs. By the end of the year, Burger King will release a version of its signature Whopper made with Impossible Burger, a major competitor of Beyond Meat.

The company has recently experienced a strong few years. They have made their way onto shelves at Target and Whole Foods. Additionally, nationwide chains like Del Taco and T.G.I Friday’s have begun to carry their products. Beyond Meat products can be found anywhere from grocery stores to hotels to sports arenas. The company was founded in 2009 by CEO Ethan Brown. It was the first company to show deep interests in plant-based meat, thus it helped to destigmatize plant-based meat with vegetarians only.

Many wonder where exactly our food system went wrong and why people are suddenly hesitant about traditional meat. Raising animals on farms to produce meat contributes to the excess of greenhouse gases resulting in climate change. Furthermore, medicine given to animals during the process has resulted in antibiotic resistance. The Beyond Meat burger uses 99 percent less water, 93 percent less land, 90 percent fewer ghge, and 46 percent less energy than a traditional burger would. This shows clear potential in plant-based meat’s ability to combat the detriments of animal meat.

After years of research, development, experiment, and even times of failure, Beyond Meat has made its mark in the food industry, which is a tough one. Going public was a major accomplishment for the company, as food companies rarely do. Now, investors will wait patiently to see if they truly will get a run for their money.