You are here
Home > Business > Who Will Profit from Uber Technologies Inc.’s Big IPO? 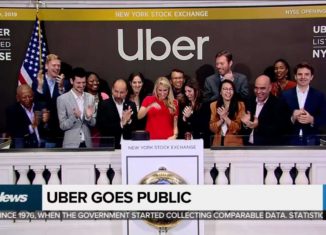 What is an IPO? An IPO is an initial public offering or stock market launch in which shares of the company are sold to institutional investors. It is then arranged for those shares to be listed on one or more stock exchanges. As Uber, the multinational transportation company, goes public, this is considered the largest tech IPO in years. The company is the highest valued tech IPO since Facebook and is part of a “wave of the Silicon Valley Unicorns” to go public this year, including Airbnb, Zoom, and Slack. While this new phenomenon is interesting, it could mean the end of an era of inexpensive rides for millions across the country. Late last year, the expectation was that Uber would go public at $120 billion making Uber more valuable than General Motors, Ford, and Chrysler- Detroit’s three huge automakers combined. However, Uber is now saying that it’s IPO will be between $44 and $50 per share, making the new value about $75.46 billion.

Okay, so Uber is public now. What does that mean for us? Most of the sums they are talking about are huge and do not mean much to the average person. For us (assuming Jeff Bezos is not reading this article), Uber’s IPO is likely to mean more expensive rides in the near future. Although Uber and Lyft have been in a price war, they are actually considered huge money losers with a deficit reaching nearly $8 billion by the end of the year. For the majority of most of our lives, they have been subsidized by venture capitalists who have been willing to gamble on the ride-hailing- upstarts and whose funding allowed the experiments to grow with low fares. However, now with these new pressures, hundreds of Uber drivers are going on strike. They feel that the initial public offering is only good for the company’s top executives at the expense of low paid drivers who are mainly independent contractors and ineligible for the benefits of full-time employment. So, do Uber drivers profit? Eligible Uber drivers – the lifeblood of the company – will not see the same returns as top executives, board members, and early inventors, like founder CEO Travis Kalanick, who owns 8.6% of Uber, but some will have an option to buy shares. Why is this a pretty big deal for us students? Well, let’s look at the numbers. Uber customers took 5.2 billion “trips over the course of the year.” This includes UberPool carpools and UberEats deliveries. Although the 25-34 age group shows a decline between 2016-2018, they still have the highest usage at 27.3%. However, although we love Uber services, the bottom line is that Uber has not given any predictions to the public on when it may be profitable. Investors are counting on future, self-driving vehicles to make it happen though. Moreover, there are agreements that there is no driverless car path to Uber profitability. It is a matter of autonomy and safety, and they are not expected to be commercially ready, let alone profitable for years. Finally, if people continue to choose Uber over public transportation, cities could put pressure on Uber, which can affect stock prices and would confuse shareholders. So, we do not know what is to come for the future of Uber, it’s drivers, it’s shareholders, and most importantly, us. Stay tuned.