You are here
Home > Entertainment > The Free Brittany Timeline 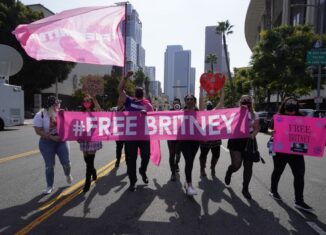 The #FreeBritney movement has been taking the nation by storm. There have been tons of news articles, social media posts, and documentaries. Everyone is dying to know what is happening with Mrs.Spears. However, the history of her battle began long before the media even started reporting. It dates back to 2008 when Britany underwent involuntary physical care. Her parents had forced this upon her, giving her no voice to advocate for herself. In 2009, Jaime Spears testified against the limited phone access that was granted to Britney. Britney’s case required conservatorship, which was maintained for many years. Later this year, Britany gave her fans an inside look into her life with her first documentary Britney: For the record. She expressed that too much of her life was controlled by lawyers and doctors. She basically felt as if she wasn’t allowed to make her own choices. In 2014, behind closed doors, the singer expressed her father’s control over her life, which the public was unaware of due to the fact that the converationship was not public. The singer spoke again in 2016 to an investigator claiming to have been taken advantage of. The Times also reported that she had filed to terminate the conservatorship for good. In 2019, Britney announced that she was taking a leave of absence from the spotlight after her father suffered a life threatening illness. As a result, the release of her album was delayed. Also, Spear’s co-conservator, Wallet, resigned, leaving Jamie (Britney’s father) in charge of the estate. In April of 2019, Spears checked into a mental health facility because she was struggling to cope with her father’s illness. Within that same month, it was claimed on the Britney’s Gram podcast that the singer was being held there against her will, causing the #FreeBritney social media uproar. A New York Times article in 2021, containing a closed court hearing from May 2019 after the singer’s return, revealed that Britney had been forced into the facility; Jamie and his legal team have been fighting these claims. In August of 2020, Britney’s lawyers opposed having Jamie in control of her estate for health reasons, but this claim was denied by a judge. Later, Britney’s lawyers filed another request to remove Jamie. This time, it was approved temporarily. As the battle over Britney’s estate continues, her lawyer and the judges continue to fight back and forth, and Spears claims she wants to end the converstionship again in June 2021. Spears can finally receive some justice as her father has discussed stepping down from her estate in August of 2021.