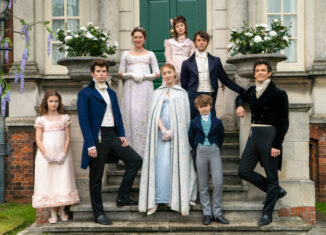 By: Alix Berman and Jesse Boxenhorn

In a world corrupted by the power of men, feminist support within social media and entertainment resources is crucial. From the time that modern society began to develop, specifically within Europe during the early 1800s, men have been controlling the lives of women. This male influence and control in power over female decisions and lifestyles is clearly depicted within the new Netflix original series Bridgerton. Executive producer Shonda Rhimes, who is known for her work with hit tv show Grey’s Anatomy, portrays the lives of Britain’s high society debutantes in the year 1813.

Although the show takes place during a time period where women did not have many rights, it centers around a female writer whose gossip paper has become extremely popular under an anonymous name. High society families are frequently anxious to read what was said (or worse, not said) about them in the articles. Furthermore, the show represents how little women knew about important life-altering decisions, including, but not limited to, how one becomes pregnant and other simple, yet important life choices. These issues mainly arise once the main character Daphne Bridgeton is married off to a spouse that she did not get to choose.

Although Daphne was set on living life as a debutante, her younger sister Eloise sees the world from a different perspective. Eloise does not want to be just another pretty girl being auctioned off to a man like the other young girls of Britain’s high society. Instead, she idolizes the gossip column and begins to investigate the identity of the writer. Although one may wonder who the infamous, anonymous lady is because of all the information she knows, Eloise is more impressed by her beautiful words, and the strength she has as a woman to produce a paper.

Since the 1800s, life for women has improved greatly. Ever since the beginning of the Women’s Suffrage movement, feminism and gender equality have played a great role within society by improving households, equalizing the job industry, and regulating social interactions. The hit Netflix show Bridgeton wonderfully represents the power of women and what they are capable of by providing strong female leads. Both Eloise and Daphne represent two different perspectives on feminism and how there are many ways to be an independent individual. Although the two characters contrast each other, and the show takes place during an outdated time period, the messages beneath the surface will stick with viewers as long as they remember that anything men can do women can do better.