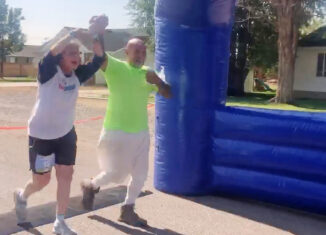 The entire world is currently consumed by politics. Political parties are beginning to divide our nation while bringing angst and stress to many individuals. This negativity surrounds a person’s daily life and can take a toll on their well-being. Personally, I have never been the type of person to look at the downside of situations. Instead, I’d rather focus on all the positives happening in the world right now.

People are constantly discriminated against for their past and the mistakes they made, but what many do not realize is that people can change and evolve. Former inmate Fidel Ybarra embodies change and how an individual can become a good person despite their background. Ybarra, knowing how difficult and grueling running a marathon can be, decided to become a support system for Carrie Kelley who was struggling while running her 68th marathon attempt. After running 22 miles with him, Carrie exclaims that she “saw how much pain Fidel was in- but he wouldn’t quit because he didn’t want [her] to run alone.” Once the two eventually crossed the finish line, the crowd was cheering while also on the verge of tears due to the miraculous act of kindness that Fidel Ybarra expressed.

Furthermore, within the past year, many influential individuals have passed away. One individual of significance is the black panther, Chadwick Boseman. His loss caused lots of pain and grief, but instead of mourning the loss, many fans decided to celebrate his life. Disney Imagineer Nikkolas Smith revealed a mural honoring the strong and inspirational person Chadwick was. The artist explains that “[t]o millions of kids, T’Challa was a legend larger than life, and there was no one more worthy to fill those shoes than Chadwick Boseman.” The world may have lost an incredible person, but his legacy will live on throughout his fans, family, and friends.

Both Fidel Ybarra and the artist behind the beautiful mural of T’Challa did not let negatives affect their daily lives. Instead, these people took the optimistic route and either celebrated what they had or changed for the better. It may seem impossible to be positive and optimistic, but deep down, anyone is capable of it.