You are here
Home > STEM > NASA Discovers Water on the Moon 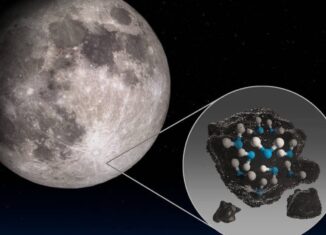 Did you know that the moon is 1,079.4 miles long? Compared to Earth, which is 3,958.8 miles long, the moon is small but visible to the human eye. Without the moon, Earth’s tilt would be disrupted, which would result in extreme weather, and humans would not be able to live. Another element necessary for human survival is water! While it may be plentiful on our planet, scientists were surprised to also discover it on the moon.

On October 26th, NASA announced that they discovered water on the sunlit surface of the moon. The device called SOFIA (Stratospheric Observatory for Infrared Astronomy) was used to detect water molecules found on the Clavius Crater, one of the largest craters visible on the sunlit surface. Paul Hertz, director of the Astrophysics Division, revealed that indications of H20 molecules were found in the past, but were unable to distinguish the H2O with OH (hydroxyl). However, with new and improved technology being used, the presence of water was officially confirmed. It is important to note that this is the first time water has been found in measurable amounts outside of the poles, despite the confirmation of ice near the poles. The ice was found in negligible amounts, making the water found outside the poles even more impressive for scientific discovery.

What’s next? NASA plans on researching how the presence of water was created and how it was stored. In the future, NASA’s Artemis program is eager to learn all it can about the presence of water on the Moon, as well as send astronauts to the lunar surface in 2024 to establish a sustainable human presence there by the end of the decade. Additionally, NASA is attempting to sample the water found without human assistance. In 2022, the space association and its private partner, which will remain unknown, will test equipment for drilling water on the surface. A year later, in 2023, a rover will be sent to the moon to collect the samples using the tested equipment and determine where the water molecules are found. For more information, check out this short video for visuals of this exciting discovery:

SOFIA Discovers Water on a Sunlit Surface of the Moon