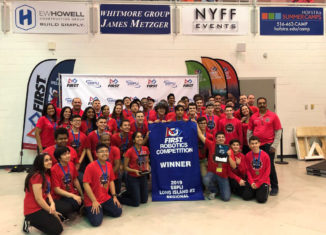 The FIRST Robotics Competition offers an arena for students with a passion for robots to explore and showcase their skills. The Half Hollow Hills Thundercolts traveled to Hofstra University where they faced forty-seven other teams in a head to head robot battle, hoping to earn a place at the world championship. The students spend six weeks preparing, designing, building, and programming their robot in order to perfect it for the competition. During these six weeks, members of the Half Hollow Hills Thundercolts used their problem-solving skills to figure out the most efficient and impressive approach. Students are exposed to real-life experiences, which allow them to learn and thrive in robotics. They are put into an environment where they are forced to work together, face challenges, and eventually overcome them. Every robot is unique and can perform different tasks. For instance, some robots move quickly and block their opponents, while others focus on scoring points. It is up to the team to figure out what type of robot they wish to build and then to triumph through the challenges that come along with building it. This year’s competition was space themed. The teams were expected to collect cargo balls and hatch panels. The robot then had to place these materials on rockets ships and cargo ships. Once completed, they had to raise their robot. Team 3624, The Thundercolts, made a robot that was very efficient at picking up and scoring the hatch panels as well as climbing up onto the platform. After weeks of hard work and complicated issues, they proved to be the best team at the competition, earning the first place prize. The experiences, opportunities, and knowledge that students obtain from participating in this competition are ones that cannot be taught in a classroom. The team members worked extremely hard to earn first place and will further impress the judges and our entire community at the world championship in Detroit!