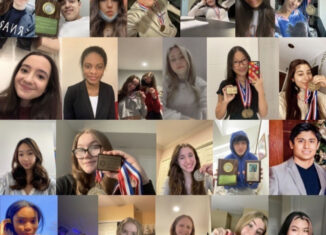 The Half Hollow Hills Speech and Debate Team is very excited to announce that 32 members have qualified to go to the New York State Forensic League Championships which were held on April 23rd – 25th. The team competed against over 20 schools across New York State and did superbly, as usual. Although tournaments and other events were held online this year, it’s been an interesting experience for everyone as we spent most of our time debating in front of our screens. Before I announce the list of people who made it to States, I would like to give a shout out to the Speech and Debate advisor, Ms. Mollica, for allowing everybody to attend all of these amazing online tournaments and for spending so much time making sure the team runs smoothly.

The following team members qualified to go to the NY State Championships:

Also, great job to everyone on the Speech and Debate team for putting a tremendous amount of effort in trying to make the best out of online practices and for being able to finish at 1st place two times in a row against a handful of other Long Island Schools in the Long Island Forensic Association (LIFA) tournaments that we all have attended throughout the year. The Half Hollow Hills Speech and Debate Team has kept a winning streak and remains one of the top three best school districts that performed in the tournaments, with the highest scores and the most debaters who placed high in their divisions.

After a thrilling week of State Championships, congratulations to our team’s top performers who placed in various categories. Congratulations to Maya Chen and Taylor Ettenger who both placed as quarter finalists in Novice LD. Congratulations to Lily Koehler, Jaime Peng, Alana Zinkin, and Emma Blumberg who placed as double finalists in JV PF. Overall, it was a prosperous year for Speech and Debate, and hopefully, the Speech and Debate team will be able to keep up all the great work and grow to be an even bigger team.