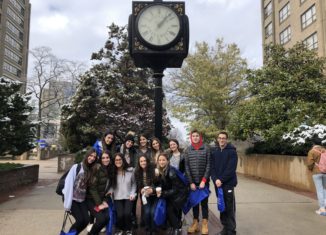 On December 11th, 2019, members of the Thunderbird newspaper staff were invited to attend Hofstra’s Annual Student Press Day. This event is sponsored by the university’s Lawrence Herbert School of Communication and is organized by journalism professor Peter Goodman. This full-day trip was intriguing, especially to the students passionate about journalism. The press day enabled high school students from all over Long Island to explore a multitude of journalism careers through presentations led by many experienced, currently working professionals. Appearances were made by professionals from major outlets like The New York Times, The Wall Street Journal, Newsday, WABC, the New York Post, MLB Radio, WCBS, The Root, and Playbill Books/Playbill Broadcast.

One of the ideas most stressed throughout the day was journalism’s current big problem: Fake News. Social media has enabled an entirely new way for false information to flood our information stream. A video was shown to the attending students, featuring Claire Wardle a fake news expert, who spoke about the extent to which “Fake News” is evolving. New technologies such as Deep Fakes, CGI, and other video editing software are becoming so real and are extremely misleading. Her motto of “When in doubt, don’t share,” is something that she is trying to spread, especially to the younger generation. According to a study done at Stanford University, 66% of high school students can’t tell fake from real websites. These “Fake News” lessons were continued by Professor Kelley Fincham. The students saw her live presentation that reiterated the new problem of Fake News being amplified by technology. Some significant words stated by Professor Fincham were “the tech has gotten ahead of the culture” and her belief that “you are entitled to your own opinion, but you’re not entitled to your own facts.” Through these presentations, High School East students also learned that knowing your sources is very important, and they were presented with some new tips and tools for sourcing.

Another cool aspect of the press day trip was the individual workshops. The panel of professionals got to work in smaller groups with the students. The managing editor at The Root, Genetta Adams, led a workshop which was extremely interesting as she stressed the ideas of how African Americans are being perceived in the news. She showed students specific examples that show African American people looking worse for the same crimes that white people have also committed, and she enlightened the students on legitimate statistics about certain African American stereotypes.

The tour of the campus concluded the wonderful journalism-filled day. Hofstra’s Lawrence Herbert School of Communication has so many opportunities for students. It was really amazing and beneficial for the High School East students to get a hands-on look and receive direct information about the current world of journalism.