You are here
Home > Sports > Islanders; Can They Turn Things Around? 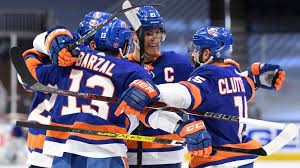 The New York teams’ massive fan base have been looking forward to watching their Islanders dominate the NHL again ever since they were knocked out of the playoffs this past Spring. Fans roar to watch their favorite hockey team play in the newest arena in all of sports located in Elmont, New York, now the new home of the New York Islanders, UBS Arena.

The new arena opened its doors on November 20th and unfortunately have lost four consecutive away games, but with the home opener in their sight the Isles fight to earn their first win of the season. The arena was packed with excitement, but the Islanders took another tough defeat against the Calgary Flames. On November 23, defensemen Zdeno Chara was called to quarantine by NHL’s Covid-19 Protocol, along with Josh Bailey, Adam Pelech, Andy Greene, Ross Johnston, Kieffer Bellows, and captain Anders Lee. Forward Brock Nelson and defenseman Ryan Pulock were announced to be out several weeks due to injury. With the key assets of the Isles out on Covid-19 protocol, the team developed an even greater losing streak following opening night. The Islanders lost eleven consecutive games, three of them being last-minute defeats during overtime or penalty shootouts. The Islanders had their first victory at home on December 11, beating the New Jersey Devils 4-2. The Devils took the lead off the bat, but defenseman Noah Dobson was able to tie it up 1-1 to keep the Islanders in this game. By the third period, the Islanders were able to score three more goals to finally break their losing streak.

While some of the team was released from quarantine, another one of their strongest players, Mathew Barzal was just placed on NHL’s Covid-19 protocol list. On December 14, the Isles are scheduled to play an away game against the Detroit Red Wings. Although a handful of pieces to this Islander team, many wonder if the Islanders will be able to turn this, so far losing season around.