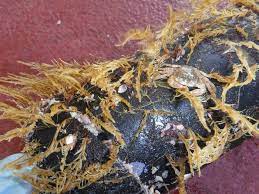 By colonizing plastic garbage, organisms have discovered a new method to thrive in the open ocean. When one typically thinks of plastic ocean pollution in the ocean, they picture a large accumulation of trash floating in the ocean. This is known as a gyre of ocean trash, and it develops as surface currents carry plastic waste from the shores to areas where rotating currents confine the debris. Some of this waste that gets swept into these patches of plastic and garbage carry organisms with them. Until a recent discovery, it was rare to find coastal species living on plastic in the open ocean. For this discovery, Linsey Haram, oceanographers Jan Hafner and Nikolai Maximenko, and Ocean Voyages Institute teamed up to develop a model to anticipate where in the North Pacific Subtropical Gyre plastic would most likely accumulate. 103 tons of plastic and other debris was collected in only the first year. Haram evaluated the organisms that had colonized the samples sent to SERC’s Marine Invasions Lab. According to her findings, many coastal species, such as anemones, hydroids, and shrimp-like amphipods, were not just surviving, but thriving on marine plastic. Partly due to habitat limitation and other factors, scientists had held the belief that the open ocean was not habitable for coastal organisms. This new discovery, however, shows that plastic is providing the habitat for these organisms. Scientists haven’t yet figured out how this works: they might drift towards current production hotspots in the gyre, or the plastic itself could operate as a reef, attracting new food sources. The presence of new coastal organisms has the potential to upset ocean ecosystems that have been relatively untouched for millennia. This unexpected outcome of plastic pollution may eventually change life on land and at sea