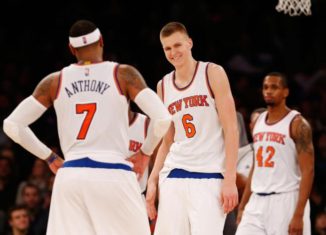 By Dylan Kaufman and Jake Nathan

The Knicks did not do well last season, which was not a surprise to anyone. Managing only 32 wins, it was obvious they needed to make some serious changes to their roster. Fortunately for fans, they did just that.

This offseason, the Knicks added some major players. However, none of them would have been possible if they hadn’t acquired their new starting point guard, Derrick Rose. Even though Rose has been plagued with injuries since his MVP season, he is still an upgrade over Jose Calderon and performed well when he played last season.

Rose also convinced his old teammate, Joakim Noah, to join the team and fill the void at the  center position left by Robin Lopez as he was a part of the trade that sent Rose to New York. Joakim Noah was the Defensive Player of the Year in the ‘13-’14 season and could prove to be a useful addition to the team. The Knicks also acquired shooting guard Courtney Lee, who brings a useful skill set levitra daily use dosage to the table but is not the strongest option. Their last major addition was Brandon Jennings. Jennings has been performing decently throughout the preseason games, and he will mostly be used by the Knicks for his passing ability.

Not only did the Knicks get more talent in the offseason, but they also still have important previous players on their roster. Carmelo Anthony, obviously, remains the franchise player of the Knicks. The 9-time NBA all-star is getting older, however, and doesn’t look like he will be returning to this old self. He still remains a viable scorer for the Knicks, though. And, of course, there’s Kristaps Porzingis. Porzingis was a rookie sensation last year, and even though the Knicks were initially upset by the unknown being picked fourth overall last year, he proved all of his haters wrong. He performed very well for his rookie season. While he may still have room to grow, the https://www.viagrasansordonnancefr.com sky’s the limit for him.

The Knicks efficiency this season ultimately depends on the health of their main players. If they are healthy throughout, the Knicks could definitely be contenders for a playoff spot. Only time will tell.