You are here
Home > Sports > The New York Mets: A Disappointing Season, but A Positive Outlook 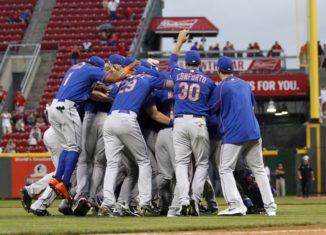 By Jeremy Schier and Kevin Rouse

The New York Mets’ season came to an end on Wednesday, October 5th with a 3-0 loss to the San Francisco Giants. Madison Bumgarner’s domination, as well as a costly three run shot given up by Jeurys Familia in the ninth inning, ultimately led to the Mets’ demise. While the Mets took an early playoff exit, 2016 was both a disappointing, yet optimistic season. For one, the Mets dealt with injuries constantly throughout the year. It started mid-June when team captain David Wright suffered a major neck injury, sidelining him for the entire year. Soon after, Lucas Duda was diagnosed with a stress fracture in his back, keeping him out for four months. Neil cialis generique Walker suffered a season ending back injury as well. With three key players out with injury, the Mets were forced to rely on steady play, but were given just the opposite. Although players like Yoenis Cespedes and Asdrubal Cabrera played a majority of the games throughout the year, there is no question that the Mets were missing pivotal players in their lineup. The injuries got even worse, this time affecting the rotation. The Mets lost Matt Harvey due to Thoracic Outlet Syndrome in July, Steven Matz in August to a shoulder injury, and Jacob deGrom to a nerve issue in his arm in late September. All three were out for the remainder of the season after having season ending surgery. The Mets were forced to make call ups from AAA and rely on players like Robert Gsellman down the stretch. Pitchers Seth Lugo and Bartolo Colon were forced to carry a heavier load towards the end of the regular season.

Although many consider the Mets 2016 season a disappointing one, others believe the Mets showed promise with a bright future ahead. Prospects such as Brandon Nimmo and T.J Rivera showed they are capable of making big impacts for the Mets in the years to come. Brandon Nimmo played 32 MLB games this year and batted .274 while having 20 home runs. T.J Rivera batted .333 and had three home runs and sixteen RBI’s. Many people believe that part of the reason the Mets weren’t as good as last year was because of the disappointing play in Michael Conforto, who was expected to have a breakout year. Conforto was called down and sent up numerous times, and although he improved as the season went on, he never lived up to his expectations. All in all, the 2016 Mets showed a lot of promise with young players and prospects. Although they didn’t make a run like they did the year prior, come April with a healthy team, the Mets can be a top threat once again.