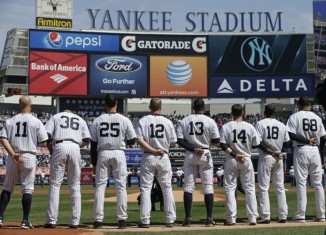 The New York Yankees have found themselves in a shocking position. They are currently a “bubble team” trying to make the playoffs. Just a month ago, people completely gave up on the Bronx Bombers and wrote them off when it came to playoff possibilities. Fans felt that the Yanks gave up on the season when trading away their two star relief pitchers, including, arguably, the best closer in the game for a bunch of prospects on July 25th. Less than one week later, the Yankees traded away their stud reliever Andrew Miller to the Indians. And what did they get in return? More prospects. Yankees fans became frustrated because it seemed the Yankees were giving up on their season with plenty of time still left to play. Then, a few days after this trade, the Yankees traded away one of their best hitters, Carlos Beltran. Once again, they recieved prospects in return. As a fan of both the Yankees and baseball itself, I understood what the Yanks were doing; prospects are important because they are the future of the organization. That being said, I, too, completely lost hope in the season and was ready to throw in the towel. As if it wasn’t already bad enough, on August 7th, the Yankees announced that Alex Rodriguez would be leaving the team later that week. Even though he committed terrible baseball crimes in the past, I, like most other fans, had forgiven him. He was the calming force of the team; the veteran who learned from his mistakes and worked to keep the young guys grounded. He spent 12 seasons in New York and will go down as one of baseball’s greatest. He’s even 4th on the all time home-run list, with only Bonds, Aaron, and Ruth ahead of him. Understandably, A-Rod was not having a good season this year, and it was definitely getting close to his time to retire; however, he was still a leader and an important member of the organization.

Although the Yankees seemed out of the wild card race after all of these changes over the summer, the month of August proved to be shocking and exciting. The Yankees have proven everyone wrong. After giving up the veterans, they called up some young players from the minor leagues. Players like Aaron Judge, Tyler Austin, Luis Cessa, and, most importantly, Gary Sanchez have given the Yanks a boost. In fact, in their debuts, Austin and Judge hit back to back homers. The biggest contribution, however, was from Gary Sanchez. Sanchez is making his mark on the league. He is the first rookie to ever win back to back player of the week recognition. Considering he’s only been playing for about a month, that’s incredible. Sanchez hit 11 home runs in his first 21 games. That’s unheard of. Overall, the Yankees have gone 18-11 in the month of August. At this moment, the Yankees are not to far away from the wild card. More recently, they won back to back games in extra innings. The Yankees have given me and the rest of New York a reason to be excited about baseball, and the fanbase is now hopeful for a playoff run.