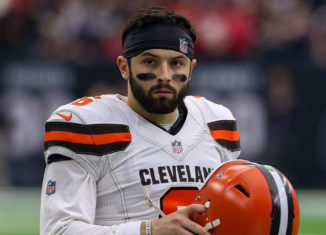 As the football season gets underway, there are several teams that I really like this year. I’m here to give you four teams that I consider Super Bowl contenders. Keep in mind, I don’t consider these teams as top four in the NFL, but I do think they have a shot at making it to the big game in February.

Cleveland Browns: What’s not to love about the Browns? Let’s start on the offensive side of the ball. Baker Mayfield looked really good as a rookie and should only make a leap in his sophomore season. The same goes for stud running back Nick Chubb. On the outside, former LSU teammates Odell Beckham and Jarvis Landry will be a lethal duo. Defensively, this is a very good group led by former number one pick Myles Garrett. Look for the Browns to make a run.

Jacksonville Jaguars: We already know what this defense is capable of. Two years ago, they came one game shy of the Super Bowl. Terrible quarterback play has been a huge problem for this team. However, Nick Foles is here to save the day. A proven winner in the playoffs, I expect this team to be a tough out.

Philadelphia Eagles: This is another team that is being overlooked. Super Bowl champions two years ago, the Eagles almost made another magical postseason run last year. Carson Wentz needs to stay healthy for this to make sense. With one of the most impressive defensive lines in the game, expect the Eagles to return to their dominant ways.

Seattle Seahawks: This team has a simple recipe that has continued to work. They run the ball and play great defense. Chris Carson will lead this running game, and they may just have the best defense in the league. With Jadeveon Clowney joining Ziggy Ansah, Bobby Wagner, and K.J. Wright, this team is as scary as it gets.