You are here
Home > Sports > The 2022 Masters tournament, the End to a New Beginning 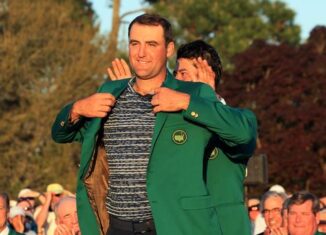 Springtime, debatebally the best time for sports. Baseball begins, the exciting March Madness college basketball tournament is underway, and of course the Masters. The Masters, a golf tournament dating back to 1934, played at the beautiful and private Augusta National Golf Club, located in Augusta Georgia. Known for its vibrant azalea’s, stunning views, classiness, and of course green jackets, the Masters golf tournament is a staple amongst the golf world.

The 2022 Masters tournament included household names such as Brooks Keopka, Jordan Speith, Justin Thomas, even 2021 Masters champion Hideki Matsuyama. Aside from those stars, one name stood out, Tiger Woods. After winning the Masters in 2019 and last playing in the tournament in November of 2020, where he failed to make the cut, Tiger was back and better than ever, well not really. A car crash in early 2021, prior to the Genesis Invitational, an event run by Woods, put Tiger into his fifth back surgery. The crash also affected his legs and limited his ability to walk, doctors told Wood’s there may be a chance of an amputation. Wood’s said no way chose to have screws and rods but in his legs and back. Much like his golf game, Wood’s pushed through the pain and managed to end up playing in the 2022 Masters. In round one of the tournament Tiger posted a one under 71, sitting in 10th place going into the clubhouse. As round two concluded, Wood’s shot a two over 74, and made the cut for the first time since 2019. As a result of that Friday second round, Wood’s shot a six over 78 on Saturday and finished the Masters with a Sunday 78 once again. Tiger still accompanied those Tiger roars and the notorious sunday red, but as Tiger’s time shortly comes to an end, new faces will soon take over the ever-so satisfying game that millions around the world play.

The regular names like Jordan speith, Xander Schauffle, Bryson DeChambeau, and Brooks Koepka, all cut from the first round not shooting a score under three over. The names we heard this weekend were world number one, Scottie Scheffler and world number sixth ranked, Cameron Smith. Scheffler won three out of five events played this PGA tour season and this masters win made it six. Smith won 2 out of the seven events played this season. Scheffler never gave up his lead since round one, shooting under par every round. Smith, the 2022 Player’s champion, is a snakey climber and maneuvers his way up the leaderboard in every event. Smith and Scheffler were paired together on Sunday, battling for that green jacket. Besides these two young stars, a familiar name, Rory Mcilroy began climbing and shot an eight under 64 on Sunday. As Smith began to collapse making a double bogey on the infamous 12th hole, Amen corner, Mcilroy and Scheffler took advantage. Scheffler made two straight birdies on 14 and 15, but Mcilroy fell short as Scheffler pulled away to shoot a final round one under and 10 under for the tournament. Unlike Wood’s or the great Jack Nicklaus, or even “Lefty”, Phil Mickleson, Rory is yet to win the Masters and this would have completed his grand slam, unfortunately, this goal was too far fetched.

The 2022 Masters ended in a surprising double bogey on 18 from Masters winner Scottie Scheffler and as Jim Nantz said in the post round interview, “This shows you are really human”. Scheffler became one of the first players to win 3 of the first 5 events of the year and win the first major of the year. As Scheffler slipped on that green jacket, he knew it was meant to be. Over the next few years, Scheffler will continue to grow as a player on and off the course and  golf fans around the globe just sit back, relax, and enjoy the new face of golf, Scottie Scheffler.