You are here
Home > World News > An Update on the East: Part Two 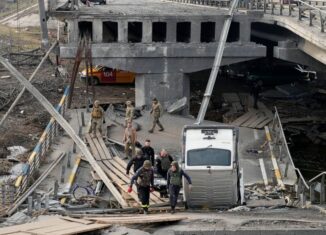 Since Russia’s invasion of Ukraine on February 24, 2022, the conflict between the two nations has been evolving each day.

The conflict stems from an extensive history between Ukraine and Russia, with, in summary, Russia believing that they are the “big brother of Ukraine” and therefore believe that it is their duty to forcefully conquer the nation, which President Vladimir Putin is currently doing at this very moment.

Since the last update on this conflict in the Eastern portion of our planet, the issue has only developed. The latest update comes from April 6, 2022.

On April 5, 2022, New Zealand became increasingly involved in this growing conflict, imposing tariffs on all Russian imports. New Zealand claims that the nation will enact a thirty-five percent tariff on all Russian imports and extend existing prohibitions to include “industrial products closely linked to strategic Russian industries.” The purpose of these restrictions, similar to all others that have been placed upon Russia, is to constrict the success of President of Russia Vladimir Putin’s regime, aiming to weaken his power by directly targeting his economy. By doing so, Putin’s success in Ukraine should be gradually limited, ceasing hostilities against Ukraine. These measures that are being implemented by New Zealand, according to a joint statement by New Zealand’s foreign ministry and trade ministry, will come into effect on April 25th. Other sanctions, according to the U.S., could be imposed upon Russia that target Putin’s adult children. According to the White House, this latest round of sanctions will be applied in conjunction with other European allies.

In order to further provide aid to Ukraine, United States authorities have provided an additional $100 million for anti-armor systems for Ukraine. This additional shipment will meet an urgent demand from Ukraine for the Javelin anti-tank missiles, which are among the weapons that have proven most effective against the powerful forces of Vladimir Putin. These weapons will be shipped to Ukraine almost immediately, being pulled from already-existing Defense Department stocks. This latest shipment to Ukraine means the U.S. has now authorized more than $1.7 billion since the start of Russia’s invasion of Ukraine on February 24th, and this support will only increase, since, the U.S. is planning on providing an additional $300 million in security assistance to Ukraine, including Switchblade suicide drones, night-vision equipment, and anti-drone systems.

Throughout this conflict though, there have been some wins for the Ukranians. Most notably, on February 24th, the Russian soldiers took over a large Ukrainian nuclear power plant, Chernobyl. Since that date, the Russians have decommissioned this power plant. However, as of April 1, 2022, the Russian soldiers actually withdrew from this power plant. This withdrawal was supposedly due to the soldiers getting radiation sickness and heavy losses of these soldiers by Ukrainian soldiers. Due to these factors, the International Atomic Energy Agency has officially stated that the decommissioned nuclear power plant at Chernobyl is back in the hands of the Ukranians.

Despite the rapid development of this conflict since last month’s update, this issue continues to progress everyday, with new sanctions or other restrictions being placed on Russia, or new developments such as Russia leaving the Chernobyl power plant and placing it back into the hands of Ukraine. Due to the rapid evolution of this conflict, it is important to still continuously remain informed on this evolving issue.