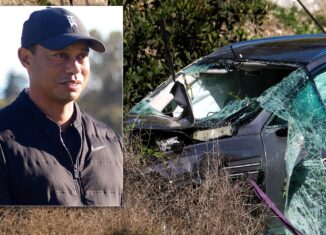 On February 23rd, 2021 at approximately 7 am Tiger Woods, got into a devastating single-car crash that left him hospitalized.  Woods was driving in Rancho Palos Verdes, CA when the SUV he was driving crossed a median and went across two lanes of road before hitting a curb, hitting a tree, and landing on its side off the roadway in the brush. No other vehicles were involved. Woods was alert when police arrived on the scene. He was unable to get out of the wreck of his own, however. Members of the L.A. County Fire Department used a pry bar and ax to remove the windshield of Woods’ car. Woods was taken to Harbor-UCLA Medical Center where he underwent emergency surgery. Woods suffered comminuted open fractures to both the upper and lower portions of his tibia and fibula in his right leg, as well as damage to the ankle bones and trauma to the muscle and soft tissue of the leg. He required surgery which included inserting a rod into the tibia, as well as screws and pins to stabilize the bones in the foot and ankle. After stabilizing, he was transferred to Cedars-Sinai Medical Center to begin rehab and recovery. Woods will likely need several more procedures on his legs. Due to Woods’ history and DUI in 2001, there was a lot of speculation surrounding the cause of the accident. An investigation into the cause of the accident has been completed, but the complete results are not being released due to privacy concerns; we do, however, know that he was traveling at unusually high speeds. It is unknown if Tiger Woods will be able to return to golf, but the doctors say it is not looking good. He is definitely missing the 2021 Masters but is hoping to return to golf after he recovers. Tiger Woods is now home focusing on his recovery.