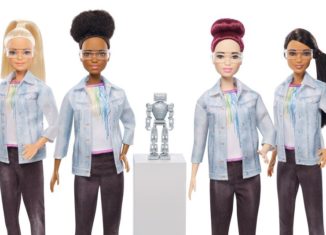 We have all grown up with classic Barbie Dolls: Beach Barbie, Travel Barbie, Fashionista Barbie, and Soccer Barbie, to name a few. Over the years, we have seen the introduction of Barbie dolls who are career-driven, like Vet Barbie and Teacher Barbie. Now, with a little help and inspiration from a forest ecologist, young children will soon have the chance to dream, imagine, and play with scientist themed Barbie dolls.

Nalini Nadkarni, an ecologist at the University of Utah, has always searched for new ways to get people, particularly children, interested in science. When her 6-year-old daughter asked for a Barbie doll, Nadkarni decided it was time for Mattel to launch scientist themed dolls wearing knee-high explorer boots and binoculars rather than handbags and high heels. Soon after, Nadkarni served as an advisor to Mattel as they began to explore and create the line of scientist-explorer dolls which includes a marine biologist, an astrophysicist, a photojournalist, a conservationist, and an entomologist.

As women continue to break barriers in STEM, these scientist themed Barbies will inspire young women, starting at an early age, to explore the fields of science, math, and technology. According to Lisa McKnight, General Manager of Barbie Dolls for Mattel, “Barbie allows girls to try on new roles through storytelling by showing them they can be anything. Girls can now imagine themselves as an astrophysicist, polar marine biologist and more.”

Although Mattel seems to be on the right track, there are some naysayers who suggest that children should be introduced to STEM by playing with a telescope or a microscope rather than a Barbie doll. Barbies have had long-standing criticism that there is too much on shopping, dating, and body image. In any case, scientist Barbies will be a step in the right direction towards introducing young children, especially young girls, to STEM.