You are here
Home > World News > The Final Presidential Debate 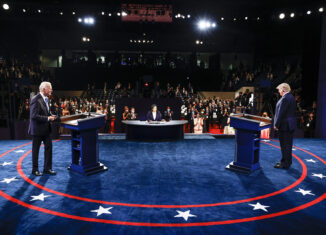 The final Presidential debate took place on Thursday, October 22. After the chaos of the last debate, nobody was really sure what to expect, but many were pleasantly surprised. With the addition of a mute button on each candidate’s microphones, the candidates were unable to talk over one another as much as they had previously, allowing for each candidate’s plans to be heard more clearly. As a result, in comparison to the last presidential debate, this debate was smoother, calmer, and more informative.

The debate began with the topic of the COVID-19 pandemic. Biden approached this issue by laying out a plan involving a mask mandate, clearer guidelines, and social distancing in order to contain the spread of the virus without closing the country. On the other hand, Trump banked hope on the development of a vaccine, which many scientists say may not come for a long time, and he said that people were learning to live with the virus without proposing a real plan to contain its spread. The next major issue discussed was foreign election interference by countries such as Iran and Russia. Biden immediately condemned foreign interference. Following this, the candidates debated the issue of healthcare. Biden advocated for the expansion of Obamacare and explained that he wanted to reduce premiums/drug prices and create insurance competition. Meanwhile, Trump expressed concerns that this plan was too expensive and wants to abolish Obamacare, but did not give specifics on what would replace this plan.

The next issue discussed was the separation of children at the border that led to the loss of 500 sets of parents. Trump expressed that although this was tragic, it strengthened border security and allowed only legal immigrants to come in, whereas Biden was more concerned with the humanitarian issues with this practice. In discussing relations with North Korea, Trump defended his good relationship with Kim Jong Un that led to no war, however, Biden pointed out that having a good relationship with a horrible dictator is not so much of a good thing. Other topics included relations with people of color and climate change, in which the candidates reiterated their previously stated views.

Overall, the debate likely helped both candidates swing some votes, as Trump did a good job trying to pin some blame on Biden for certain things, while Biden did a better job connecting with the audience and undecided voters by speaking directly to the camera. However, most sources say that a majority of voters believe that Biden won the debate. Although this debate likely will not have a huge impact on the election results, it was another chance for each candidate to lay out their policies one more time before Election Day.