You are here
Home > World News > Justice Antonin Scalia’s Death – A Fork in The Road for the SCOTUS? 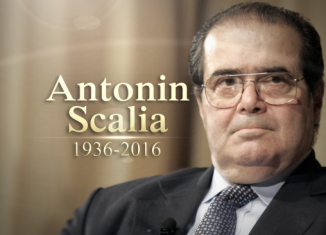 Supreme Court of the United States (SCOTUS) Justice Antonin Scalia passed away at age 79 on Saturday, February 13th, 2016, and the nation mourned the passing of a legal scholar regarded by many to be brilliant in legal and constitutional interpretations. Justice Scalia, who was appointed by Ronald Reagan in 1986, was the longest serving U.S. Supreme Court Judge. According to the New York Times, “Justice Antonin [Scalia’s] transformative legal theories, vivid writing, and outsize personality made him a leader of a conservative intellectual renaissance in his three decades on the Supreme Court.” Justice Scalia consistently championed originalism – “the theory of constitutional interpretation that seeks to apply the understanding of those who drafted and ratified the Constitution.” Mainly appealing to conservatives, Scalia’s viewpoints were often infuriating to liberals.

Justice Scalia’s views were strong on many issues, and he was tremendously vocal – seemingly unafraid to voice his opinions despite the members of the audience. Whether it was his opinions on gun violence or affirmative action or gay marriage, Scalia was consistently firm in his viewpoints and even appeared to be inflexible when interviewed. However, as we watched so many mourn his death and listened to fond stories being retold by his fellow Supreme Court Justice Ruth Bader Ginsburg, we hear of a man who was always eager for a good debate. Despite the fact that he held opposing views from Justice Ginsburg, a known liberal of the court, he never let their dissenting legal views interfere with their close friendship.

Few know that this man with such an outsized reputation was actually born to humble roots in Trenton, New Jersey, attended Xavier High School in New York City, and went to Georgetown University as an undergraduate. Later, he would receive his law degree from Harvard University, serving in the administrations of Presidents Nixon and Ford and being nominated by President Reagan after years as a professor at the University of Chicago. He had nine children, including one who would become a Priest and officiated at the Mass for his funeral. His very traditional career roots seem to understate the magnitude of his later achievement with his rise to the Supreme Court. However, as the major conservative voice on the Court, his unexpected death certainly created room for a more balanced court in terms of liberalism and the potential for significant shifts in legal opinions, especially on issues that conservatives and liberals seem to differ so starkly on – such as the right to gun ownership or the need for Affirmative Action policies to ensure opportunities for all groups – matters on which Justice Scalia disagreed vehemently.

Now, as President Barack Obama serves the final year of his presidency and the presidential race remains very heated, a tough decision must be made – who ought to be nominated to become the next Supreme Court judge? Many Republicans in the Senate and G.O.P. candidates on the campaign trail have already vowed to block any nominations by President Obama – arguing that they should wait for President Obama’s successor to make the decision. The desire is most likely laden with hopes that his successor would be from the Republican party and therefore would gain the opportunity to nominate a conservative Justice in the mold of Justice Scalia.

in 2016, the U.S. Senate is predominantly Republican. So, while it is President Obama’s prerogative, as current President, to fulfill his duties and nominate a new judge, the Republican Senate feels equally empowered to block his nominations through a public pledge to refuse to put the matter on their agenda to even take up a vote. In effect, blocking the nomination and stalling the process until a Republican Presidential candidate wins the election, as they hope.

On March 16th, 2016, President Barack Obama carried out his duties and exercised his rights as the sitting President to nominate a candidate to replace Justice Scalia. According to the New York Times, “Merrick B. Garland [was nominated by Obama] to be the nation’s 113th Supreme Court justice, choosing a centrist appellate judge who could reshape the court for a generation and become the face of a bitter election-year confirmation struggle.” Obama stated, in a formal Rose Garden ceremony announcing his selection, “I’ve selected a nominee who is widely recognized not only as one of America’s sharpest legal minds, but someone who brings to his work a spirit of decency, modesty, integrity, even-handedness, and excellence. […] Presidents do not stop working in the final year of their term; neither should a senator.” So now the matter is positioned for a major political fight. The nominee, as President Obama explained, deserves a fair hearing. It will be interesting to see if that is allowed to happen.

The matter of Senators elected to conduct their duties choosing not to do so for personal political beliefs is mildly disturbing. Justice Garland was already highly respected by both liberals and conservatives. However, this is President Obama’s third choice of a Justice nomination, having successfully placed Justice Sonia Sotomayor (2009) and Justice Elena Kagan (2010) on the Supreme Court Bench in the past. Politics have always played a role in Supreme Court nominations but it would take tremendous public pressure for this Senate to sincerely assess this candidate. Justice Garland is a highly respected moderate judge. He is not overly liberal in his point of view proving that he was carefully chosen to not be so liberal that he would be considered extremely objectionable to Republicans. However, on sensitive issues facing the court at this time, he may at least guarantee a fairer hearing than Justice Scalia might have given similar issues in the past. Both sides are sensitive to the fact that with eight justices currently, the one opening must be careful to be filled by someone sensitive to their issues given the uncertainty of another opening. Also important is the fact that a nominee that is very liberal or very conservative could tip the balance in the court to one side or the other and therefore tip the opinions and decisions of the court to one side or the other for years to come.

The next few months will undoubtedly increase the debates on this issue as the presidential elections intensify. For President Obama, he can at least rest assured that he has fulfilled his job by nominating one of the best candidates for the role. When the history books are written on Justice Scalia, it will likely say that amidst his tough decisions that were not always welcomed, he still earned the highest respect of the legal community, and for his selfless service to the nation, he will continue to have our respect.