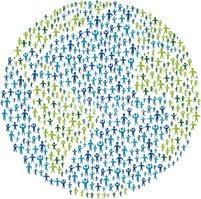 In many nations, fertility has significantly decreased in recent decades. Currently, two-thirds of the world’s population reside in regions or nations with lifetime fertility rates below 2.1 births per woman, or roughly the number needed for a population with low mortality to experience long-term growth of zero. Between 2022 and 2050, it is predicted that the populations of 61 countries or regions would decline by 1% or more. This is due to persistently low fertility rates and, in some cases, high emigration rates.

Eight nations—the Democratic Republic of the Congo, Egypt, Ethiopia, India, Nigeria, Pakistan, the Philippines, and the United Republic of Tanzania—will account for more than half of the expected growth in the world’s population by 2050. More than half of the increase forecast through 2050 is anticipated to come from sub-Saharan African nations. The proportion of the population that is working age (between 25 and 64 years old) has been rising across most of sub-Saharan Africa, as well as in several regions of Asia, Latin America, and the Caribbean, as a result of recent declines in fertility. The “demographic dividend,” or change in the age distribution, offers a limited window for enhanced per-capita economic development. This is a great achievement and a momentous day for the United States.